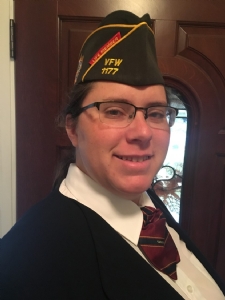 Jessica hails from Denton Texas.  After earning her B.A. in Mathematics from Texas Tech University, she enlisted in the U.S. Army in 2006.  After attending Basic Training at Ft. Leonard Wood, MO, and advanced school at Ft. Huachuca, AZ, she was awarded the Intelligence Analyst (35F) MOS.

In 2007, Jessica was assigned to the 66thMilitary Intelligence Group in Darmstadt, Germany supporting US efforts in Central Europe and supported the 7th Army in Heidelberg, Germany.  While there, she conducted a TDY to Kosovo in support of peace keeping operations.  In 2009, Jessica was assigned to the 3rd Infantry Division G-2 in Ft. Stewart, GA.  With 3rd ID, she deployed to FOB Speicher, Iraq between 2009-2010, in support of Operation Iraqi Freedom and Operation New Dawn.  In 2011, SGT Flores, served as a Reservist for the 55th Sustainment Brigade S-2 NCOIC at Ft. Belvoir, VA.