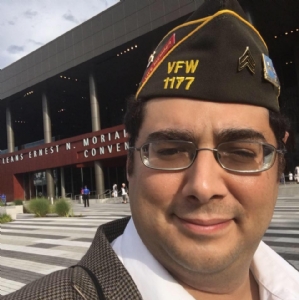 Les Flores was born in San Francisco, CA.  He graduated from Riverbank High School in Riverbank, CA, before earning his B.S. in Business Administration.  In 2003, he enlisted in the U.S. Army as an Intelligence Analyst (96B/35F).
While in the Army, Les was station in Leighton Barracks, Wurzburg, Germany with the 1st Infantry Division.  There, he deployed to FOB Danger, Tikrit, Iraq in support of Operation Enduring Freedom.  He was then station to RAF Molesworth, United Kingdom with the AFRICOM element.  From there, he deployed to Kampala, Uganda in support of Global War on Terrorism efforts.  Finally, he was stationed in Ft. Stewart, GA with the 3rd Infantry Division.  As part of the division headquarters, he was deployed to Camp Speicher, Tikrit, Iraq in support of Operation New Dawn.
Les Flores has earned the Army Commendation Medal x 3, the Joint Service Achievement Medal and the State Department Meritorious Honor Award.  He has also earned the Iraq Campaign Medal x 2 and the Global War on Terrorism Expeditionary Medal.
Les Flores has held the office of Post Quartermaster since 2017.